This is the idea that was floating around in my mind when we decided to buy the campervan.

I can see now that beds might have been an issue.  And my husband mechanic gave me a good talking to.

“If we break down somewhere remote I don’t want to travel hundred of miles looking for a spare part.” Good point. “A fiat chassis is the most reliable, and the easiest to source parts for.” Good point I think. “The fuel consumption on a newer van is a lot less.” Good point. “And a huge chunk of our budget is fuel.” Good point. “Between new and old there is a point where campervans hold their value quite well.” Good point. “You might have to wade out in the snow at 3 am in the dark beside the woods with the funny animal noises to answer a call of nature, but with a newer van you can go inside”. EXCELLENT point.  Although the van above is still an option with that one?  No.  Now I know how Katie feels re the stick insects.

A newer van it is then.

travel and accommodation. And we can easily take Wooster.

Ours is a 10 year old Mclouis Glen 690, which has been deeply loved by its previous owners, so much so that the service history could do with a small forklift to move it.  Mclouis Glen sounds a bit like it was made in the wilds of Scotland, but it’s Italian, with a Fiat chassis.

We’ve read that everyone gives their van a cute name so…….

We’re not.  It’s a 2.8 JTD Diesel (not bad on fuel), and is 3.5 tonnes – which makes a whole load of difference compared with a heavier model.  The price of tolls is often less, there’s a different speed limit, fuel consumption is better, MOTs are easier and in France they last for 2 years instead of one.  Alternate years it has a CT, Contrôle Technique, the French MOT, and an engine emissions check.  There’s 24000 miles on the clock.

It has 6 seatbelts which was the top priority. Most 6 berths have fewer seatbelts for some reason (but surely that means ranking who you like the most that day which seems a little unfair).

There are two tables, one right at the back, which turn into beds.  If sharing a van with teenagers all gets too much Neil and I can hide away at the back.

There’s a big bed above the cab for the boys.  The cab is fab.  Fab cab.  Gadgets galore.  Neil said it was like Christmas Eve before he went to pick it up.  I want to give the van a name.

There’s a fridge and a little freezer, a cooker, oven and we are taking our microwave.  Haute cuisine!  In reality my cooking will be just as bad.  Everyone always votes for Neil to cook.  Or Adam, or Matt or Katie.  Or Wooster.  And then me.  I have been the brunt of many a cooking joke.  Friends call off when they realise it’s me in the kitchen.  Well they used to;now I have scraped together a modicum of culinary knowledge and am kind of ok.  I’m pretty good at anything chocolate related.  Interest plus practice is the key. 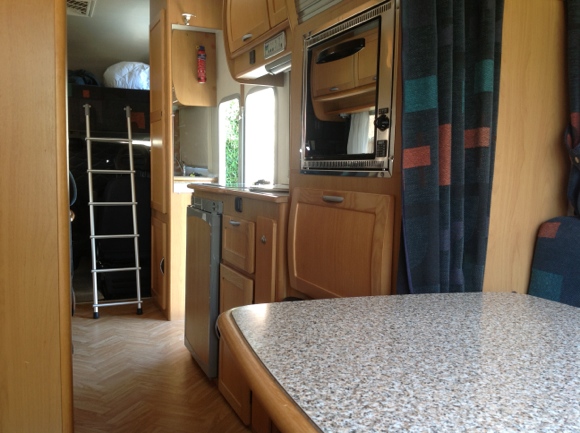 There’s a solar panel on the roof which is great.  It means we can recharge the two 12v leisure batteries which are also topped up with the alternator whilst on the move.  So we can wild camp or stay disconnected to power for longer.  Our plan is to avoid big campsites where we can.

Adam is also looking into WIFI and how to get/boost a signal.  On another campervan blog site (which is really great and far more informative than ours) we read that over calm waters you can even pick up a WIFI signal in Italy from Greece – http://www.europebycamper.com

The first thing we did on our “togetherness” trip was allocate separate overhead storage cupboards each, to be touched by anyone else at their peril.  We all need a bit of space and everyone’s priorities are different.  Katie may well want to fill hers with a whole playmobil village and shoebox stables filled with grass, but who’s to say that’s any less important than shoes or pants?  I think it will all be a little less stressy if we can have 30 cubic centimetres to call our own.  I’m currently fighting my corner for a bit more clothes space because I need to take work clothes too, but that battle has not been won (yet).

And lastly, but by no means least, there is a shower room with toilet to avoid going out into the woods with the funny animal noises in the snow.

9 thoughts on “Our Home”